UX Design, Wearable, Interactive Installation
Project Overview
During my time at ArtCenter College of Design, I transferred from the Fine Art program to the Interaction Design program to explore the interactive art form between human and machines. I had the opportunity to work on many fascinating projects and these two are my favorite. They both created experiences through technology that challenges our perception.
My Contributions
Kaleidoscope, an interactive installation, was a solo project. I developed the project concept, built prototypes, conducted three rounds of user testing, and installed the final piece.
‍
Wearable R.I.P., a wearable device, was a collaboration with Yu-Ting Cheng (industrial design student). I led the creation of the interaction between the wearer and the wearable and fabrication of the final working device. Both projects were displayed on my grad show and were well-received by visitors.
Interactive Installation
Kaleidoscope
The thesis of this project is an open-ended interpretation of play. As a kid, I have always been fascinated by kaleidoscopes. I wanted to understand how I can leverage its fundamental elements and construct a playful experience.

A kaleidoscope is an optical instrument with two or more reflecting surfaces tilted to each other at an angle, so that one or more (parts of) objects on one end of these mirrors are shown as a regular symmetrical pattern when viewed from the other end, due to repeated reflection. These reflectors are usually enclosed in a tube, often containing on one end a cell with loose, colored pieces of glass or other transparent and/or opaque materials to be reflected into the viewed pattern. Rotation of the cell causes motion of the materials, resulting in an ever-changing view being presented. [Wikipedia]

When I looked into a kaleidoscope, I imagined myself stepping into it like Alice entering Wonderland. What if I can make a giant kaleidoscope that I can actually step into and see my own reflections? What if instead of colored glasses, I can see video or even live stream at the other end?

I started by experimenting with geometric shapes. I wanted to know how it looked if it was 5-sided instead of 3, how the length changes the view, what if one end is tapered, etc. Next, I tested playing different videos to see which type of content looked most alluring. It was pleasing to see videos of nature in the kaleidoscope when organic forms are dissected by geometric shapes.
‍
‍
To understand how size affects the experience, I created two giant kaleidoscopes. One of them encourages two people to stand on each side to look at each other's reflections. The other one has a video projected into it, which looks like fireworks. People loved the larger size and being able to see each other in it, but the fun factor was not there after the initial face-to-face. I am still missing one vital element, rotation

I conducted more tests with prototypes that can be rotated. Rotation did make people want to interact with it more. After all the experiments, I landed on a concept for the final play. And whats left to do was figuring out the technology.
‍
‍
The final result of the experiments was an interactive installation that had three parts: the depth sensor camera (on the left) connected to VJ software, the rotatable kaleidoscope (on the right) with an iPad on its back, and a ceiling-mounted projector.
‍ 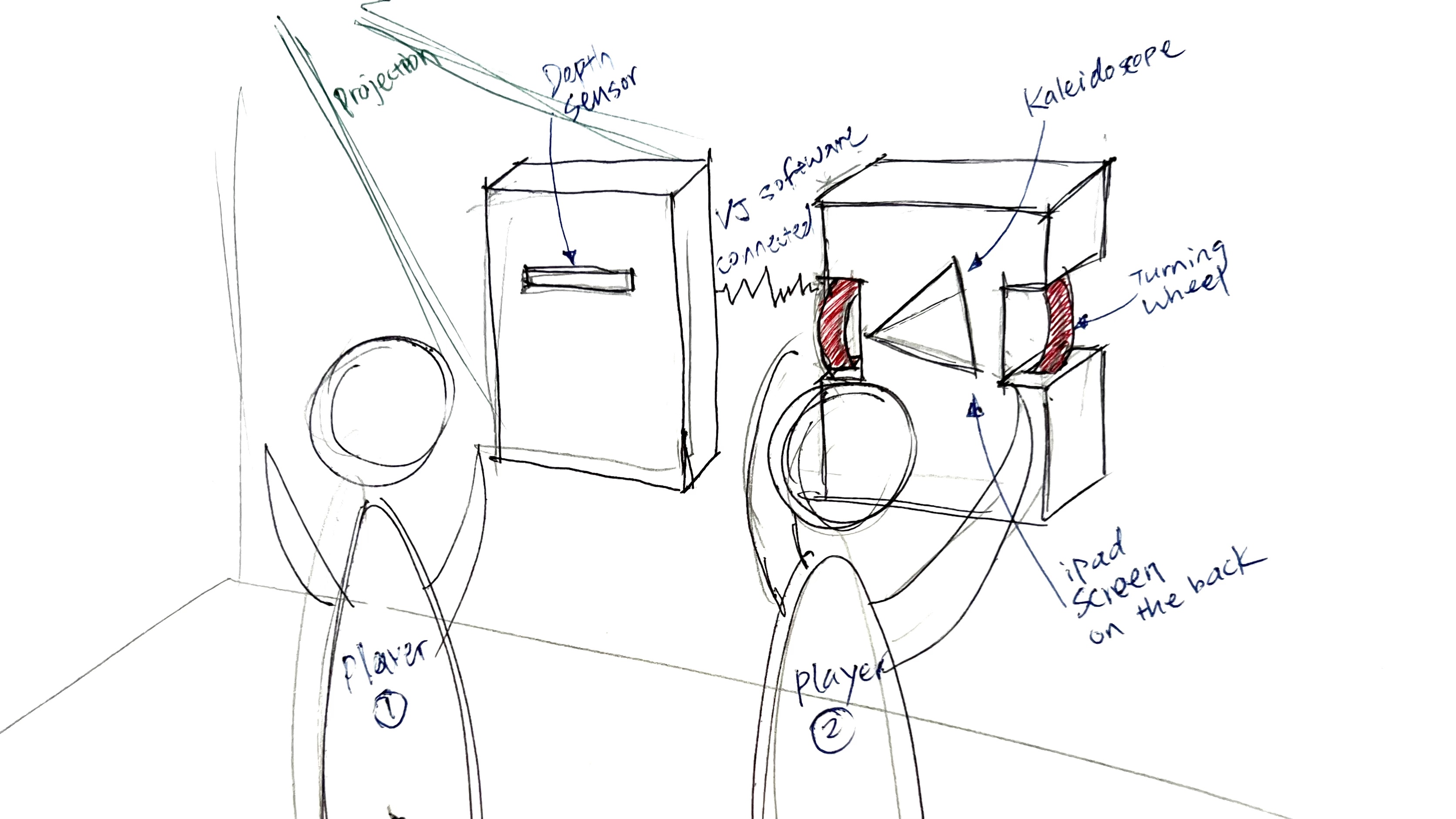 ‍
For two players to engage in the experience, one will stand in front of the sensor; the other will look into the kaleidoscope. The camera captures the person's depth data which is turned into 3D pixels by the VJ software; the projector will then project that in front of the person. The other person will see the same 3D effect but inside the kaleidoscope. The orange wheel on the sides of this box is designed for rotation. It adds interactivity and playfulness to the experience. Since I wanted this to be an immersive experience, I made the size of the kaleidoscope's eye piece large enough to be viewed with both eyes.
‍
Wearable R.I.P. (featured on Core77) is a wearable "coffin" created for a fictional dystopian industrial city where people live in poor conditions and can't escape from the noises of the machines. Inspired by a wingback chair that represents comfort and relaxation and a coffin that symbolizes death and ending, Wearable R.I.P. is built for agonized city dwellers who want to enjoy brief moments of peace.

The device has a hidden force sensor that touches the back of the neck when worn. The wearer can rest their hands at the bottom of the device, just like wearing a hoodie with a front pocket. When the wearer slightly leans back, the sensor will trigger the speakers on each side of the head to play soothing sounds from nature. In that instant, the wearer is taken into a different world by sounds.

The cushions inside the device make it comfortable to wear. The coffin shape of the device is a statement of the environment they live in. This device is also an experiment between consciously vs. unconsciously controlling for sensory feedback. The action of leaning back can be a conscious behavior to relax or an unconscious one. Both actions will trigger the sounds to play, but the wearer's reaction will differ.

This device was displayed and played by visitors at my grad show. The most gratifying moment was seeing the astonishment on their faces when they heard the sounds from the device triggered by natural and subtle movement of their heads.
Wearable
Wearable R.I.P.
LINKEDINCONTACTRESUME